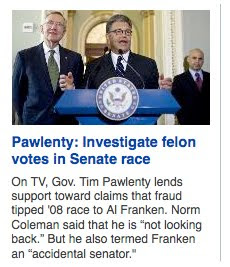 As I have mentioned in the past, Minnesota has a grand tradition of thoughtful and effective politicians.

Our current governor and our former senator are not two of them.

Mr. Pawlenty can't let it go. Al Franken was declared the winner, and he's our senator. From all reports, I think he's doing a great job, though I already expected a good performance. He's a smart individual and a good thinker, like a lot of writers.

The thing that really gets me about the above screen grab is not Mr. Pawlenty's grasping at straws, it's Mr. Coleman's comment about Mr. Franken being an "accidental senator."

Excuse me, Mr. Coleman. Have you forgotten that your opponent, one of the most thoughtful politicians in my lifetime thus far, died in a plane crash just ten days before the election? That's about as accidental as it gets.
Posted by kittywhumpus at 8:17 AM