"No single group should ever presume to claim special ownership of the founding fathers or the Constitution they wrought with such skill and ingenuity. Those lofty figures, along with the seminal document they brought forth, form a sacred part of our common heritage as Americans. They should be used for the richness and diversity of their arguments, not tampered with for partisan purposes"

-Ron Chernow "The Founding Fathers Versus the Tea Party"
NYTimes, September 27, 2010
Posted by kittywhumpus at 1:18 PM No comments:

The Mississippi River You May Never See

I live near the Mississippi River. I work 500 yards from the Mississippi River. I grew up in a town on the river southeast of here. When I moved to this state at the age of ten, I was in awe of the fact that I was living on the western side of a geographical celebrity, lauded by Mark Twain and other artists; a waterway of continental historical proportions. I came to take it for granted, but every once in a while, it hits me again: that's the Mississippi River. This happened just a few days ago when babywhumpus pointed to the river and said "lake." I told him it was a river, the Mississippi River, and he repeated "Mississippi" perfectly. I again felt the pleasant weight of history, and felt fortunate to live here.

For the last four years, the University of Minnesota's Bell Museum of Natural History has been working on a film about the river entitled "Troubled Waters: A Mississippi River Story," and it was due to premiere on October 3.

(Pay special note to the update in the grey box, because it could be that something fishy is going on at the University, and that's quite simply the last thing we need.)

From an administrative and budgetary perspective, pulling a premier this late means that money has been lost in labor and materials, simply related to the event. That's not even addressing the costs associate with the film itself. Something like this will continue to feed into a public mistrust of government and the University that has been planted and tended by our current governor (himself a graduate of the University). We have enough people taking aim at us without shooting ourselves in the foot.

All this to say: make some calls; send some emails. Might as well flood the president's office and copy URelations. Tell your friends. I don't know about you, but as a citizen of Minnesota, an alum of the U, and a current employee, I'd like to see this movie.

Link: Professor P.Z. Myers' post on this issue.
Posted by kittywhumpus at 12:49 PM No comments:

I love my International Harvester refrigerator. They only made them for seven years, and mine is a 1952, I think. It came with the house, and I made sure to write it and the 1951 Tappan range into the purchase agreement. 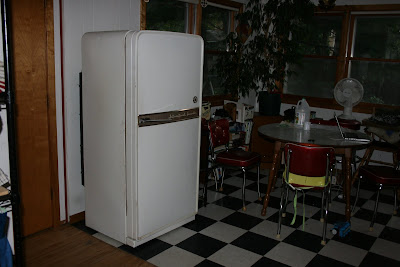 They both still work, and they have been our fridge and stove for the past nine years, rumbling along like the beautiful workhorses they are. This summer, however, the thermostat on the oven went, so I can't bake anymore. (It shoots from off to 500 in a matter of minutes, rendering all cookies dark puddles of carbon.) And I grew tired of emptying out the freezer every two weeks to defrost it. It would be caked with ice to the point of barely opening, and the food in it would be buried like a baby mammoth in a glacier. It sucked the cold out of the fridge leaving bottles sweaty and cool and vegetables flaccid as a... well, let's just say limp and lifeless. With the two-year-old running at peak intensity, there's little extra time for such things as defrosting, and I could no longer remember what I had hauled down to the chest freezer in the basement, causing me to repeat food purchases, laying in a stockpile against some near-future armageddon, perhaps sometime soon after the Minnesota governor's race is decided.

I came to a decision: the stove would have to be fixed. After perusing the new choices, I felt only despair that we seem to have lost all sense of how to make something utilitarian have real style. Plus, nothing had the same usefulness of my Tappan. Coincidentally, an almost exact model showed up at the ReUse Store, so we bought it for parts. It's in the garage. I still have to get the thermostat out and swap, and here's hoping that it works. It's on the list. 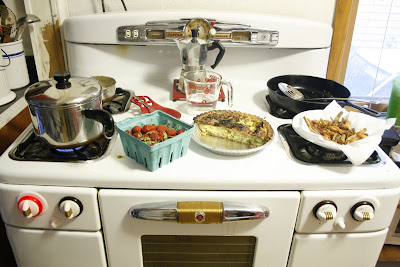 The refrigerator would have to be replaced. Almost all the new ones are ugly (I don't like stainless steel, and the white ones are lifeless hulks), and the 1950's-styled models are just a bit out of my rational price range. We settled on one that, while not terribly attractive, has made our lives better in an ineffable and completely materialistic way. It keeps food cold, it has a bottle rack for beers (though no bottle opener on the inside handle latch, like the IH). It's not "femineered" like the International, but what is, really? I put an old metal bottle opener on a strong magnet on the outside of the new fridge, and the old one is, you guessed it, in the garage. It still works, it just needs to be restored a little bit, and I want to find someone who will do so or who will at least use it and take care of it. 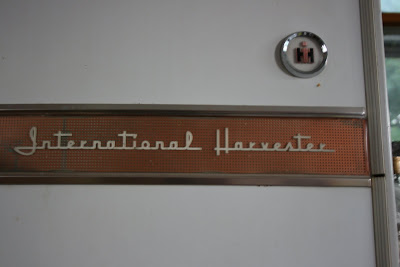 But I got to take "defrost" off the list, so it all works out. 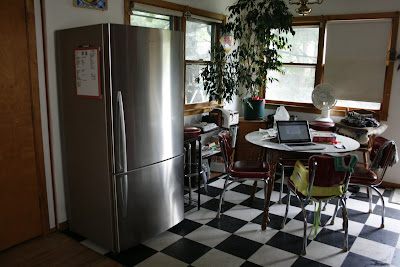