This is old news, but the first paragraph of the New York Times review of the new television program "The Philanthropist" reads to me like the first sentence of a review of "Iron Man:"

"Teddy Rist (James Purefoy), the playboy tycoon hero of “The Philanthropist” on NBC, is negotiating an oil deal in Nigeria when a near-death experience tears away his smug complacency."

The review is actually pretty good, so the producers should be happy (USA Today did not like it so much), but it really does not sound "new" to me. Not that anything really is.

I don't watch a lot of television. I don't say that only to brag and make myself sound superior, I say it because once "Friends" went off the air, I lost interest in anything but PBS. I admit to being curious about this program, given my constant news searches on subjects concerning philanthropy and nonprofits, but I am skeptical, and I admit that I will probably never watch it. "Billionaire playboy turns do-gooder" is not exactly a hot storyline. Bruce Wayne and Tony Stark kind of cornered that market, didn't they?

(Aside: Why not a female philanthropist? I guess she would have to be a former beauty queen turned celebrity billionaire turned action adventure philanthropist. Hey! Paris Hilton might not be busy.)

USA Today writes, amusingly: "The Philanthropist has no more to do with actual philanthropy than Superman does with journalism." And Steve Gunderson, CEO of the Council on Foundations reiterates: "His life is exciting. His solutions arrive in sixty minutes. And he always succeeds... I wish philanthropy was really that fun and that easy"

Here's one of my favorite things to do when something like this is in the news. Look it up:

From the reviews, it sounds to me as if the protagonist of "The Philanthropist" is doing good deeds to exorcise personal demons, not out of a thirst for social justice. But a billionaire writing a check for a gosh-darn-good proposal does not make for good TV. A dirty, perhaps even bleeding, billionaire racing through the jungle with a vaccine for an African child apparently is. Maybe the title should be "The Vigilanthropist."

I suppose it's intended as irony. I mean, it could be, right? I just can't think how, at this moment. Apparently, it's based on a real person. Loosely based. But his story is not interesting enough for a summer TV series. After all, he's married and travels the world with his family. Blah.

If "The Philanthropist" wants to be philanthropic, is NBC selling its ad space at cut rates to nonprofits and having a lot of public service announcements? Does it contain a segment at the end, addressing the realities of each episode's situation, such as vaccination issues and Africa, including action ideas for viewers? Let me know if it does; that would be interesting. (I note that there is a small "Outreach" section on the show's website.)

The actor admonishes us with comments like "I think your heart is a little blackened thing if you don’t like this show." Yup, I am not going to watch "The Philanthropist" because I am dead inside. I am the Tin Man before Dorothy came along. Then again, this actor also says "He’s giving, not taking, and it makes him feel really f*#%ing good. " This is a classic contradiction in terms and also an example of a not-very-critical consciousness.

Next up: "Teddy and Phillip's college friend asks for their help to negotiate with the Indian and Pakistani governments to rebuild the region's water system." I am sure it will get into the intricacies of the history of those two countries, including a lesson on the religious nature of many of the conflicts. You'll have to let me know how it is.
Posted by kittywhumpus at 11:49 AM No comments:

What a Colossal Waste of Time

Hey, have you heard that we are in the midst of an economic downturn, something like the worst recession in the collective memory? I think I heard that somewhere. Did you know that the American health care system it teetering on the verge of collapse? There seems to be some data out there that pointing in that direction. Were you aware that we are facing environmental challenges registering at the "catastrophic for humanity on a world-wide level" level? Seems to me I read about that somewhere.

So what are our legislators working on?

They actually wasted our public time and resources on this steaming heap of bullshit:

One Hundred Eleventh Congress of the United States of America

Begun and held at the City of Washington on Tuesday, the sixth day of January, two thousand and nine

Resolved by the House of Representatives (the Senate concurring),

SECTION 1. ENGRAVING OF PLEDGE OF ALLEGIANCE TO THE FLAG AND NATIONAL MOTTO IN CAPITOL VISITOR CENTER.

(a) Engraving Required- The Architect of the Capitol shall engrave the Pledge of Allegiance to the Flag and the National Motto of ‘In God we trust’ in the Capitol Visitor Center, in accordance with the engraving plan described in subsection (b).

Attest: Clerk of the House of Representatives.

Attest: Secretary of the Senate.

The Senate: 7/10/2009: Received in the Senate, considered, and agreed to without amendment by Unanimous Consent. (consideration: CR S7372)

I do believe that some of my Minnesota Congresspeople are going to be hearing from me. I am certainly not shocked about the republicans, least of all Ms. Bachmann, but I am heartily disappointed in Mr. Walz, Ms. McCollum (she's mine), Mr. Ellison, Mr. Peterson, and Mr. Oberstar.

What difference does it make? Why do I care? What does it really change in my life? Well, as a nonbeliever, it pushes me further out of public discourse. It contributes to the culture of sanctimonious, hyper-religiosity and to the rewriting of history we have been enduring in America during this round of evangelical madness. It actually carves in stone the false notion that this is a "Christian Nation" that was founded on "Christian Values."

I was not alive when this happened:

A law passed by the 84th Congress (P.L. 84-140) and approved by the President on July 30, 1956, the President approved a Joint Resolution of the 84th Congress, declaring IN GOD WE TRUST the national motto of the United States. IN GOD WE TRUST was first used on paper money in 1957, when it appeared on the one-dollar silver certificate. The first paper currency bearing the motto entered circulation on October 1, 1957. US Treasury Fact Sheet

Neither was I around when "under God" was added to the pledge in 1954. I doubt we are going to get rid of either any time soon, even though we seem to have had this pesky little thing

Article the third [Amendment I]
Congress shall make no law respecting an establishment of religion, or prohibiting the free exercise thereof; or abridging the freedom of speech, or of the press; or the right of the people peaceably to assemble, and to petition the Government for a redress of grievances.

around for even longer.

As the Government of the United States of America is not, in any sense, founded on the Christian religion; as it has in itself no character of enmity against the laws, religion, or tranquillity, of Mussulmen; and, as the said States never entered into any war, or act of hostility against any Mahometan nation, it is declared by the parties, that no pretext arising from religious opinions, shall ever produce an interruption of the harmony existing between the two countries.[27]

Congressional moves like H Con Res 131, "under god," and "In God We Trust" are official actions, taken by the government, that sanction religious beliefs. They are a waste of time, mere political posturing, they place Christianity above all other religions, and they leave out a whole population of Americans checking the atheist, agnostic, nonbelieving, spiritual, and "other" boxes.

Until we stop only putting our patriotism into abstract symbols of nationhood and our trust into deities instead of into our fellow citizens, we will be mired in the same "country first" mentality that plays to politics and not to people. We have real problems, and spending public money to chip arcane and irrelevant words into a visitor center wall will get us no where. Apparently, some section of the American population thinks that America is in a godless tailspin into depravity, and this is a congressman's idea of how to slow it down. I have no idea, but are these not the same people who get their collective feathers all a-ruffle if the government so much as sniffs around their property lines, screaming about privacy? But they are all-too-happy to allow the government into the most private places, as long as it is their own cherished beliefs that the government is supporting or endorsing.

I understand that these are official United States words being carved into official United States walls, but wasn't it bad enough that they were made official in the first place? It's a step in the wrong direction. Mr. Ellison was given loads of heat for taking his oath of office on a Koran. Thomas Jefferson's Koran. He voted "yes." Even if they want to say, well, it doesn't say "in Yahweh we trust," we all know that they certainly don't mean "Allah," and it's a load of bunk to suggest that "God" is somehow all-inclusive, especially in America in 2009.

Wait until Thor finds out.

We could use a good thunderstorm.
Posted by kittywhumpus at 12:23 PM No comments:

Labels: america, god, in god we trust, pledge of allegiance, under god

one of these things is not like the other

One of these things just doesn't belong,
Can you guess which thing is not like the others
By the time we finish our song? 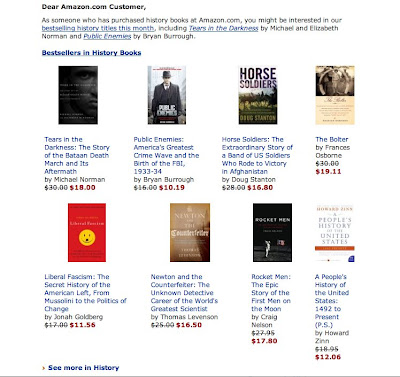 If you guessed "the red one," you'd be right.

Methinks Mr. Goldberg is playing fast and loose with the word "history."

And so is amazon.com.
Posted by kittywhumpus at 10:23 PM No comments:

I don't know where to start

This poster, advertisement, travesty is hanging in a hallway I pass through on my way to the "expression room," a.k.a. "The Bunker." 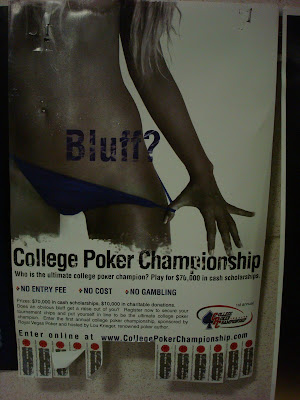 Again, anyone who thinks we are living in a postfeminist world, feast your eyes.

Do I need to go into an analysis, or is it as obvious to you as it is to me?
Posted by kittywhumpus at 12:30 AM 1 comment: 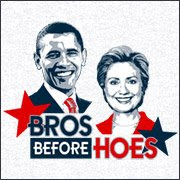 We're all set.
Posted by kittywhumpus at 2:40 PM No comments: