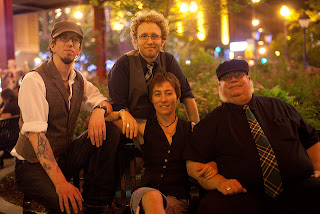 OK, this is making me nuts, so I think it's only fair that I post it here so you can listen to it and be nuts, too.

Recently, Pete's band the Hounds of Finn wrote and recorded a jingle for Finnegan's Beer, a Minnesota nonprofit beer company that donates all its profits to fight hunger. Excellent, right? Except I can't get the jungle out of my head, which means it's a really good jingle, but it's in there, and it won't get out.

Sheesh. I need a Finnegan's.

Here's the song:
Drink Like You Care - Hounds of Finn by Finnegans Beer

Here's a blog post about the song complete with an odd interview with the Hounds:
Finnegan's Blog

Here's a video about the recording of the jingle:
Hounds of Finn: Drink Like You Care
Posted by kittywhumpus at 5:04 PM No comments:

Labels: beer, Drink like you care, Finnegan's, Hounds of Finn

We none of us live forever, but there are people we expect to Be, to remain. To continue. When we lose them to the one thing we all have in common, it does not seem possible, because they were More. More than us, more than individuals. More than death.

When I was learning myself in college, one of the many times I have met me, Adrienne Rich was one of the tour guides, pointing out important artifacts along the way. Pieces of oppression, bits of victory, nouns placed unnaturally and precisely adjacent to their verbs. The poetry and prose of a journey, documented just, it seemed, for me.

I still have all I ever knew of her, in dog-eared, marked-up books, and these will remain; they will continue. What we who were not her family and friends have lost is possibility and the knowledge that she was still out there creating, striving, observing, and recording.

My heart and thoughts go out to those who knew and loved her.

My sadness is deep, and so is my gratitude.
Posted by kittywhumpus at 9:05 PM No comments:

So much for that "Don't be evil" maxim of yours...

I don't think things are quite that desperate, yet.
Posted by kittywhumpus at 6:56 AM No comments:

Being sad led me to church last week for the first time in over twenty years. I was not looking for a higher power or searching for meaning in a tragic loss, I was looking for community. Not necessarily people to talk to, but I wanted to be around people who knew my friend and perhaps hear him spoken of. So I went to his church, and I took babywhumpus with me.

We got gussied up, perhaps not as fancy-like as I would have when I still went to church, and people dressed in their Sunday best, but somewhere in the middle. I don't know what people wear to church anymore, but I suspected that Unitarians would be somewhat relaxed about dress code.

I had checked out this particular church online before, as it is near our house, progressive, and would perhaps provide an opportunity to troll for teenaged babysitters without too much propaganda. Nonbelievers are somewhat limited in that sense, as we don't generally gather regularly to network. When I learned that my friend attended this church, it became more appealing as his version of spirituality was kind, accepting, and non-threatening. We never went because, well, daddywhumpus is in a band, and Sunday mornings are slow-going, and scurrying out to a meeting house is the last thing that appeals to us. Unless there's bacon.

Plus, I am both an atheist and an introvert, who is unenthusiastic about change, new environments, and new situations.

I lost my community of commiseration when I got laid of, where I was around people who felt the same as I, or at least knew my friend. I decided to go to church.

daddywhumpus was out of town, so I was trudging into new territory on my own with babywhumpus, which is a recipe for discomfort  if not disaster. He's not a sit-still-and-listen kind of child. He has contemplative moments, but they are commensurate with his life: short. And often about food.

The experience was about what I expected. The church is welcoming and without garish adornment; one is not assaulted with God or Jesus. There are pamphlets about human rights and specific communities and how the church is inclusive to all. I could see my friend here, smiling openly at people, talking and walking through the halls. Had I shown up there when he was in attendance, I can precisely see the reaction on his face: open-mouthed, wide-eyed shock, wonder, and gratitude, all at once, followed by a hug and kiss.

I took babywhumpus around the spaces, telling him to be quiet, even though Unitarians are not generally as stuff as some, and showing him the organ and its pipes. We sat at the back and only talked to a few people, and my friend was mentioned at the beginning. We did not make it long; once he tired of scribbling on the bulletin, was finished munching his Cheddar Bunnies into crumbs all over himself and the floor (mortifying), and made to crawl up under the pews like his Gran did when she was little, I got him out of the sanctuary. We walked the halls a little bit more, looking around, and I tried to get him back into the service as I wanted to hear the message and see if I could be comfortable here, but it was not to be. It was a beautiful day, so we went to the co-op, and went home to make eggs and sausage.


I'm glad we went; It was nice to pay respects in that way to my friend--he would have appreciated it.
Posted by kittywhumpus at 8:08 AM No comments:

This is Public Service On Wednesday night, I sat on the couch at a friend's house, and said, "I am one of perhaps a thousand people who feel exactly the same way I do, right now, about this one person."

One of thousands of people who are sincerely shaken, devastated, and heartbroken by the loss of a single individual who, through being who he was, touched them all.

I don't know how Gary DeCramer got any "work" done, as he dropped everything whenever anyone stopped by his office and tapped on his door. It did not matter who you were. He may have held up a hand to give you pause, but when he finished whatever he was doing, he was all yours.

But this WAS his work. People. Relationships. True and salient leadership through the most humble of actions: listening. This is not to diminish his brilliance and intelligence. Indeed, his ability to focus and listen only added to his discernment.

In the bright constellation of Gary's career, I am but an observer in a planetarium, but because of who he was, I want to add my notes to the log. His commitment to the common good will live on in the people he inspired.

I cannot think of him or see his name without tears because when I think of him, he pops into my head so clearly, and I know that those images are mine to hold, as they will never be repeated in real life. Smiling at me as he approaches, his arms already open for an embrace. Offering up a witty and perhaps ribald remark on current events as we commiserated over the news of the day. Lighting up over a poem he wanted to share with the class to focus their study...

"Did his heart break?"

"Yes, honey. Sometimes that happens. I'm sad, but we will be okay."

Gary would have wanted it that way.
Posted by kittywhumpus at 11:40 PM No comments: Gary DeCramer died yesterday, and we all lost someone. Gary was a public servant, a leader, father, husband, friend, colleague, mentor, advisor...Gary was a person to emulate; a person we can all hope to be like.

I recently left the Humphrey School, where I worked with Gary for the past four years. In the busy time before my last day, I wanted to write notes to my colleagues to let them know what they meant to me, but I ran out of time.

I have been carting the stationary around for the past month, moving it from place to place as I clean and organize here at home. I figured I still had time to get these notes out because I had lost a job, not the people who I worked with and loved. Those people would still be there.

One of my biggest regrets about leaving the Humphrey is that I will not be seeing you almost every day. You have been a friend and mentor, and working with you has been a treasure and a joy. You are the kindest person I have ever met, though your gentle nature does not dampen the fierce commitment you have to the common good and to the people you care for. Your dedication to students is inspiring, and I will miss sitting in your office, listening to you work out a lesson plan or lecture. I will miss talking about our gardens as spring rolls into Minnesota. I will miss you kneeling down by my computer to work out the kinks in a presentation. I will miss the welcome that says, "I am genuinely happy to see you."

Your leadership is meshed with caring, understanding, and nuance. You can see the facts of a situation and chart the best course, even in an instant, and manage different personalities with ease, always making someone feel valued, even in his or her most vulnerable moments. You are someone I wholly trust.

You once wrote to me that my attention to beauty was not missed.

Gary, your humor, kindness, and gratitude were not missed, either.