There's got to be a morning after

Like many people, I went to bed after President Barack Obama's acceptance speech, grabbed my phone, and hit "refresh" on an election results page until I couldn't keep my eyes open anymore.

That was just me?

I won't believe it. 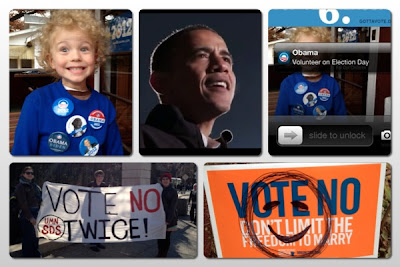 When I finally put down the electrons, the only race outstanding here in Minnesota was the Graves-Bachmann congressional seat. I saw the amendments fail and the 8th CD go back to the DFL. I saw DFL majorities predicted in the Minnesota Legislature.

(Don't worry, Governor Dayton. I know you said you would shine our shoes and press our shirts if we gave you that, but consider it a reward for all your hard work the past two years.)

Now, as I catch up on the (very) few hours of social media I missed during what feels like a short night-time nap, I'm feeling good. I don't feel like gloating or rehashing gripes about the "modern" GOP, although I must say that Mitch McConnell remains an ass. Not exactly breaking news.

Ok. That was a little gloaty.

What I wish they would understand is that Barack Obama is a thoughtful, caring, and strong leader who seeks consensus and compromise, and he really is listening to the fact that 48% of the citizens of this country did not vote for him. Just as the 50% who did need to understand that 50% is a slim majority. They are results that demand compromise, and this is the place where the GOP falls down.

Barack Obama has compromised, and the GOP has not. It's time for those "clear eyes" to be truly clear. American voters seem to want a divided government, but they still want to see something accomplished. For reasons that entirely elude me, they do not make a connection between a 14% approval rating and GOP recalcitrance, and they kept the House in republican hands for now.

Those representatives have two years to prove they care about governing; that they care about the citizens of this country beyond political grandstanding, or the midterms could make that decision for them.

*and maybe some laundry.
Posted by kittywhumpus at 7:55 AM