Minnesota has a grand tradition of intelligent, thoughtful politicians. Eugene McCarthy, Elmer Anderson, Hubert Humphrey, Paul Wellstone, and Walter Mondale leap to mind. We have a lot to be proud of.

It's something we have to remember on a day like today, when Michele Bachmann and Tim Pawlenty, two of our less-than-thoughtful politicians, gather with celebrity Sarah Palin and talking head Sean Hannity in downtown Minneapolis for a rally and fundraiser. I am uncertain if the time-space continuum can handle the weight of the white hot rhetoric that will erupt from the convention center. Certainly, the fabric of fact-based knowledge has already been fraying and is in danger of being reduced to dust by the claims of the Teabaggers and the far right, and an event such as this might just do us all in, leaving the entire populace of Minnesota as jibbering, paranoid idiots, convinced that census takers are going to show up at our homes, make us gay marry, go through our wallets, and tell our children to eat their vegetables or Czar Obama will put them into an interment camp where they will have to pray to Mecca five times a day.

Did I miss anything?

The woman who is running against Michele Bachmann, Tarryl Clark, has a site set up where you can make a photo of yourself with the Dynamic Duo. They call it the 10,000 dollar photo because that reputedly what it will cost to have yourself photographed with these two women, which is certainly money well spent. 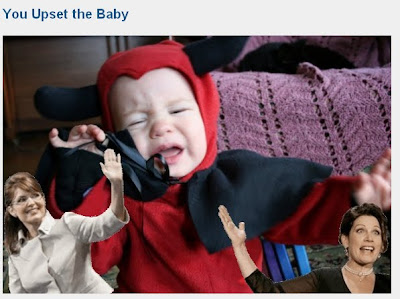 babywhumpus isn't too happy about it. 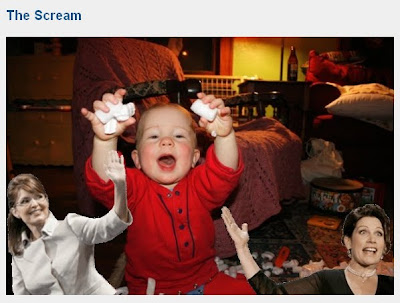 Later, if my stomach can handle it, I will try to write about the sad and sorry state of women in politics.
Posted by kittywhumpus at 11:44 AM

Sigh...
You know, these people would be amusing if they weren't so damn scary. I mean, they're actually serious about this stuff! I see these folks carrying signs that say, "I Want My Country Back!" or other similar idiocies. Well, what country are you talking about, and do you mind if I move to say, Belgium before you take over?!
Oy...